Etched in History: Scrimshaw from the HMS Beagle

Just a tooth? Take a closer look. Currently on display in the Expanding Horizons gallery of the Wardlaw Museum, this seemingly unremarkable tooth has an extraordinary tale to tell. This is a piece of scrimshaw made by James Adolphus Bute during his service on the second voyage of the H.M.S. Beagle, December 27, 1831 – October 2, 1836. Not only does this object provide us with a new perspective of a pivotal moment in history, but it also helps us to understand the global origins and scientific importance of the museum’s collections.

Since the founding of the University museum in 1838, by St Andrews’ residents and University staff, the museum and its donors tapped into imperial and scholarly networks to acquire what many termed, “curiosities” of the natural world. During the eighteenth and nineteenth centuries, both private collectors and museums used the networks of missionaries, military officers, colonial administrators, and naval expeditions to acquire natural specimens and ethnographic artefacts across the globe. In turn, these collections became instrumental in advancing scientific knowledge about the world and humankind.

This piece of scrimshaw is one of six which were made during the famous Second Voyage of the H.M.S. Beagle. Issued by the Royal Navy and commanded by Captain Robert FitzRoy. The expedition was principally a hydrographic survey of South America exploring and charting the coastline of countries, such as Brazil and Argentina. However, the ship is renowned for one of its most notable passengers: a twenty-two-year-old Charles Darwin. This journey occurred at the very beginning of Darwin’s career as a naturalist, at a time when he was even contemplating a career in the church, yet it was fundamental in shaping his theories about evolution and natural selection. As he stated later in his life, the voyage, where he spent time making geological notes, botanical observations, and collecting specimens in places such as the Galapagos Islands, was ‘by far the most important event in my life.’

But alongside Darwin (or ‘Fly-Catcher’ as FitzRoy affectionately called him) were a diverse crew of seventy-four: from highborn naval officers to working-class sailors, royal marines, and even a disgruntled surgeon, Robert McCormick, who zealously guarded his title as the expedition’s official naturalist. One crew member included Aberdeen-born James Adolphus Bute (1800 – 1877), who, having previously been a blacksmith’s apprentice and merchant sailor, had joined the Royal Marines in 1820, rising to the rank of Sergeant. Bute had, at his own request, reverted to the rank of private to join the expedition, but would eventually work his way back up to the rank of corporal. According to the Game Book of the H.M.S. Beagle, Bute was recorded as one of the marines allowed on shore to hunt wild animals. This means he potentially assisted Darwin while he collected specimens from exotic locations for his research. Bute’s experience as a blacksmith also meant that he would have assisted in creating storage containers for many of these specimens to be returned to Britain. However, one of Bute’s principle duties as a Royal Marine was protecting Darwin and the rest of the crew. In December 1832, the Beagle reached Tierra del Fuego, while the expedition made contact with the native Fuegians, Bute stood guard at the camp’s perimeter to prevent any unexpected attacks and supplies from being stolen. For his service during the expedition, Bute would later be awarded the Royal Marine Meritorious Service Medal in 1848.

But while Bute would have experienced exotic locations and thrilling moments on the voyage, like the rest of the Beagle’s crew, he would have also suffered long periods of boredom. One pastime he picked up from other naval voyages was scrimshaw. Scrimshaw is the name given to the craft of, and the wide range of objects made from, whalebone (baleen). This craft originated from the art of the Inuit peoples of Greenland, Canada, and Alaska, where people would carve scenes and depictions, either by needle or knife point, on the surface of whale teeth, or bone. By the eighteenth century, scrimshaw became popular amongst sailors from Europe and America to occupy the idle moments at sea. Bute’s piece of scrimshaw comes from a Sperm Whale (Physeter Macrocephalus), which was hunted to near extinction due to the lucrative sale of whale oil during the period. This species, which is common to the warm waters of the Pacific, is unlike many other whale species because of its narrow lower jaw, which holds up to 20 / 25 pairs of teeth.

It is likely that Bute acquired this sperm whale tooth when the H.M.S. Beagle stopped to take on supplies at the Falkland Islands, a popular whaling station at the time. In general, many unskilled sailors could easily practice scrimshaw. First, they would file down the baleen to a smooth surface, then if not by freehand, they would place a print over the tooth and prick the outline with a needle to then etch out the image. Once the lines were carved sailors would often rub the soot from lamps into the lines to make them stand out.

Bute’s piece of scrimshaw depicts the H.M.S. Beagle beached and being repaired on the shore of the river Santa Cruz, on April 16, 1834. While crew fixed the bottom of the ship, Darwin and an expedition of crewmen, including the commissioned artists Conrad Martens, travelled upriver to find its origin. Although they came tantalisingly close to discovering the source, Lago Argentino, they had to turn back as their rations got dangerously low. Interestingly, Martens produced a similar sketch of the beached H.M.S. Beagle, as depicted on Bute’s piece. These two images provide a unique insight into how different crew members recorded their experiences of the voyage through various means, and how they were possibly inspired by similar moments in the voyage. Overall, this piece of scrimshaw is a perfect example of the fascinating collection at the Museum of St Andrews University, and the new stories behind these objects which are being discovered every day. 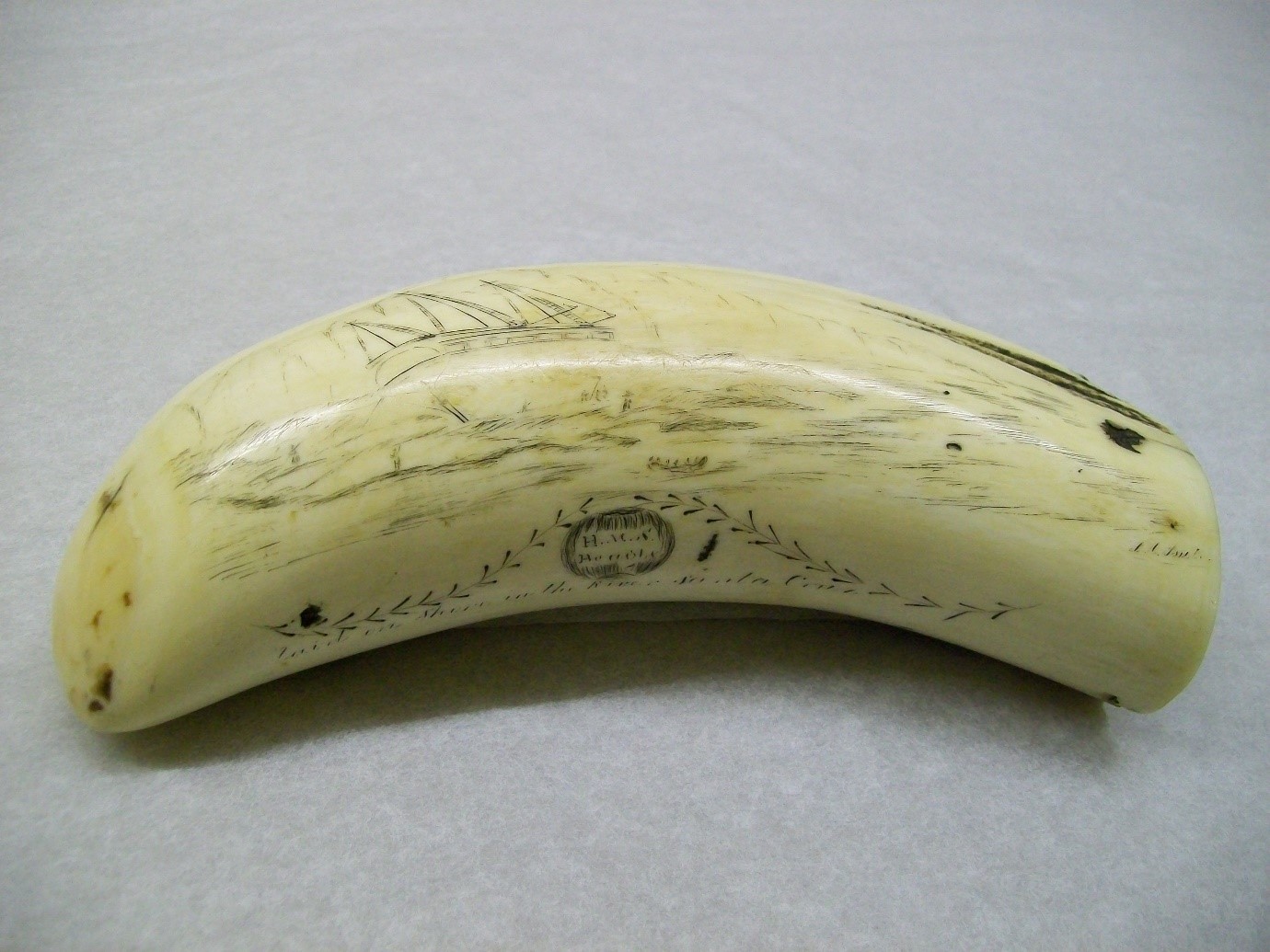 Above: Scrimshaw piece made of a sperm whale tooth, by James Bute. The scene depicts the H.M.S. Beagle grounded on the shore of Argentina on April 16, 1834. Inscription reads: ‘H.M.S. Beagle / Laid on shore in the river Santa Cruz.’ Image courtesy of the Museum of the University of St Andrews.

Above: ‘Chart of the World on Mercator’s projection’, by Daniel Lizars, Edinburgh, 1831. This map details the specific routes of previous expedition around the world. Image courtesy of the David Rumsey Map Collection, davidrumsey.com. 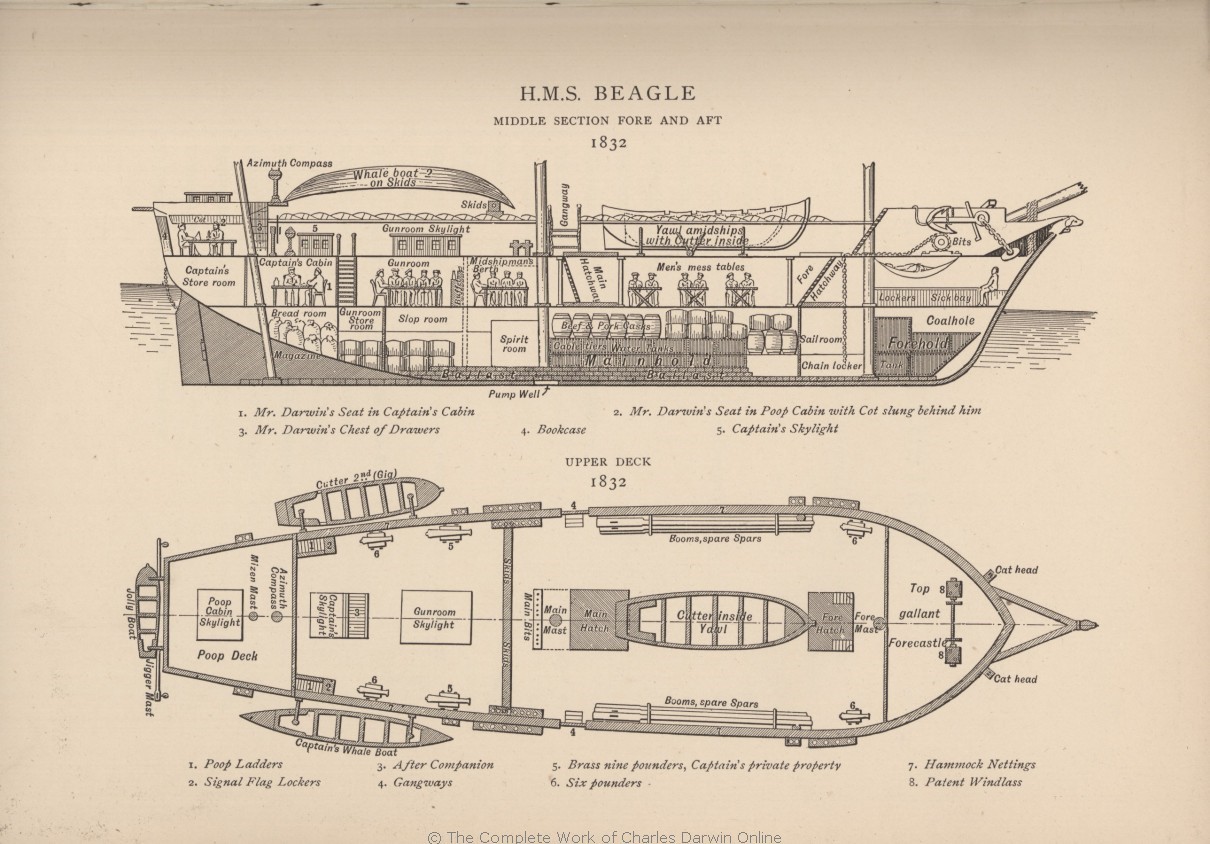 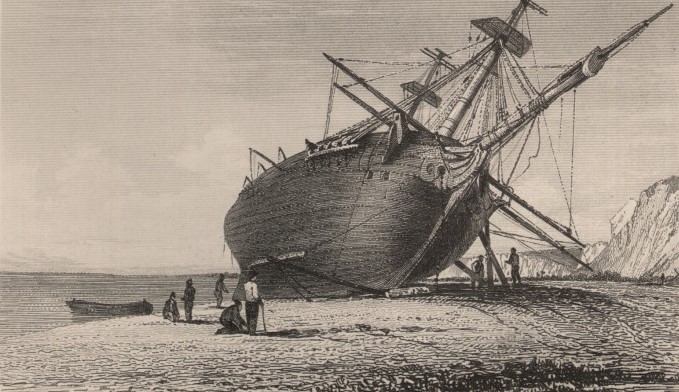 Above: Sketch of the H.M.S. Beagle laid ashore on the Santa Cruz River, April 16, 1834 by Conrad Martens, from John van Whye, ed. 2002 – The Complete work of Charles Darwin Online, http://darwin-online.org.uk