There are many talented people, while many are diligent, hardworking, and ambitious in their careers. However, there are not enough positions at the apex of major multinational organisations, so why do some people get to the top? Perhaps it’s a certain, je ne sais quoi?

We have in our midst somebody who has reached these dizzy heights, but if he knows how, he would rather suggest it was luck. However, if we consider the career of Jean-Marc Murré, we may consider otherwise.

Jean-Marc spent his early years in Algeria, where his family, originally from France, had farmed since 1834, establishing a large-scale vineyard and winery producing four million bottles of wine each year. All this ended with Algerian independence, when the family settled in France. After some time farming family-owned land in the south of France, they resettled in Palma de Mallorca. It was here, having graduated from the French University of Aix with a languages degree, Jean- Marc found the first job that would lead him to an interesting, exciting, and successful career in the travel industry.

Cruise ships coming from the USA to Europe would stop at Palma to replenish stocks en route to their final destinations. An industry had developed to provide the required services. In his new job, Jean-Marc helped passengers with formalities such as customs, immigration, health etc. and also arranged excursions and sightseeing.

This led to an invitation to join an American company that organised packaged holidays to Brazil, Switzerland, Germany, and southern Spain. The job involved the bulk buying of hotel rooms and other facilities one year in advance, which involved a great deal of travelling. Winter was spent in the Canary Islands, or Brazil; summers in Switzerland, southern Germany, and the south of Spain so, as Jean-Marc remarked, “For me, it was summer all the year round.”

There followed a London-based spell as Director of Operations at Hotelplan, a Swiss tour operator. This time the task was to book accommodation and services for high-end tourists.

His success in this soon came to the notice of the major European package-holiday operator, Intersun, which invited Jean-Marc to join the company. Here, in addition to contracting beds, he managed the company representatives in Spain, Portugal, Italy, and Greece with their respective islands.

Around this time a new city, Jubail in Saudi Arabia, was under construction for the Saudi Government. Bechtel, one of the largest engineering companies in the world, was managing the project that included a major hospitality element. Jean-Marc was recruited to run this. He became responsible for welcoming VIPs, Ministers, and Heads of State. The company operated a number of luxury guesthouses with full staff, while the facility also ran its own TV station.

The decision was then made to seek a quieter life – Jean-Marc and his wife Patricia moved to Florida, where they bought a guesthouse overlooking a wonderful beach on Siesta Key, Sarasota. As he puts it, “We exchanged the sands of Saudi Arabia for the sands of Florida.” Coincidentally, after retiring to Fife many years later, and joining the Rotary Club of St Andrews, he found that fellow member Jerry Beaulier had once lived just opposite the guesthouse, albeit at a different time!

However, a friend from Spain, who operated businesses in Palma and Orlando, and was keen to establish a similar operation in New York, persuaded Jean-Marc to help find a location. It proved impossible to find a suitable site in New York City. However, one was found in New Jersey just thirty minutes from Manhattan. The grateful friend extended Jean-Marc’s contract to identify lawyers, architects, and contractors.

Just as this contract was successfully completed, there came the call that would project Jean-Marc to the highest echelons of one of the world’s largest, most famous tourism and entertainment companies. The call came from Euro Disney. The offer was that he should work in the construction and launch of a new facility in Paris based on a Wild West theme.

He accepted the offer and returned to France. When the project was completed it had six hotels, a theme park, a golf course, and an entertainment centre. The timing, 1992, could not have been worse commercially, with Europe going through a major financial crisis. Against this backdrop, Jean-Marc was given a sales and marketing role focusing on the Middle East and Japan. The role began to grow, first being responsible for all of the world apart from Western Europe. Ultimately responsibility extended to the entire world, with Walt Disney World in Orlando, Disneyland in California, Hong Kong Disneyland, and Disney Cruise Lines included in the portfolio. As he modestly puts it, “my small unit generated satisfactory numbers.” For his contribution to French tourism he was awarded the MEDAILLE du TOURISME by the French government.

After twenty-three years at Disney it was time not just to relax, but finally to retire. Jean-Marc’s wife Patricia is Scottish and had always wanted to return here. So they found an ideal spot close to St Andrews, where they have spent the past three years putting down the roots that this time will be permanent. Perhaps, he might write his memoirs one day. So this piece may be merely the synopsis! 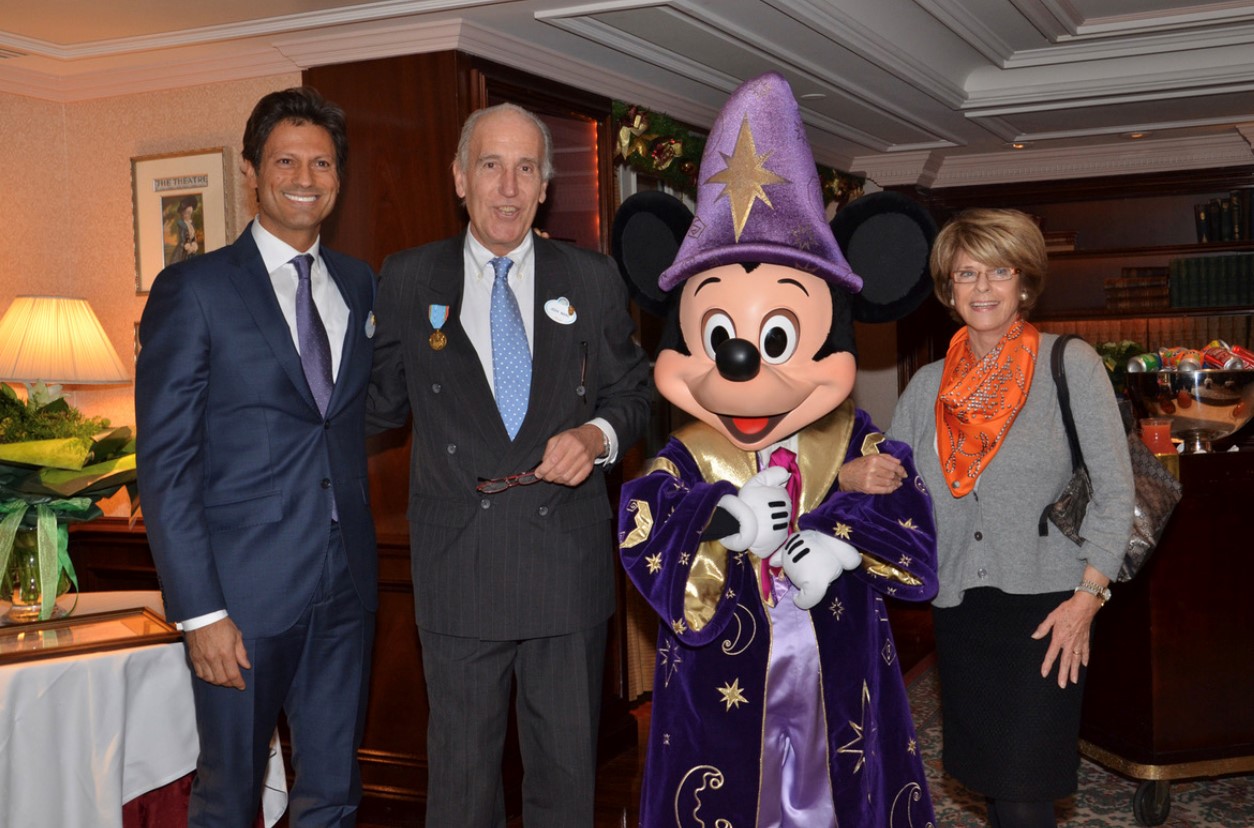 After the presentation of the Médaille du Tourisme. Jean-Marc, second from left, with President of Euro Disney, Philippe Gas, Patricia Murré, and Micky Mouse. (Click to enlarge)