Wildlife is Par for the Castle Golf Course

By Lorn and Mary Macintyre

The keen eye of Trevor Harris does not miss the kestrel hovering in the rising sun’s rays as he and his greenkeepers prepare the Castle Course for the new day’s golfing. Perhaps the parent bird is showing its gratitude to Trevor, lover of wildlife, for having monitored the successful raising of its brood – eleven young since 2018, all ringed and recorded for RSPB records.

This Tayport man’s experience of tending and managing golf courses, from his apprenticeship at the age of sixteen for over forty years, is formidable: Scotscraig; Tayport; Stonehaven; Monifeith; Cupar. “I was head man at Cupar, which is reputably the oldest nine-hole golf course in the world. I then went to Arbroath. I had never been involved in the construction of a golf course, so I decided to go for the Castle Course, arriving six months into the build, as Deputy Course Manager. I am responsible for training, development, the condition of the course, and being present when the course manager is not available.”

The Castle Course, outside St Andrews on the Boarhills Road, was created out of level farmland, the topsoil scraped off then heaped into mounds. It was constructed to strict USGA (United States Golf Association) specifications, with a gravel base for drainage and fourteen inches of sand on the greens. The undulating layout by the sea is both attractive as well as challenging. “During construction coal seams were discovered, because in the ancient past there had been a lot of forestation,” Trevor reveals.

The Castle Course is named after Kinkell Castle, which stood on the headland of Kinkell Ness in the Middle Ages, close to the double green of the ninth and eighteenth holes. The logo of the Course is a Scottish peer’s helmet, centrepiece of the coat of arms of the Monypennys, landowners in that part of the East Neuk for centuries (in particular at Pitmilly) who acquired the land of the Castle Course from the Prior of St Andrews in 1211. Before that, it is believed that the Course was part of a hunting ground of Pictish kings, who adopted Saint Andrew as their patron. Around 1100 AD the land was known as the Cursus Apri, or Boar’s Chase. The only hunt that takes place nowadays is for the perfect score, and the odd golf ball from the rough!

Opened in 2008, the championship Course is venerated by Japanese and American golfers, for the views as well as the test of their skills. It is part of the Links Trust complex of courses, the Old Course being the premier course. “If you can’t book a time on the Old Course, the Castle Course is often the second one,” Trevor explains. “The ladies love it.”

The Course was closed during the Covid-19 lockout, but it still had to be maintained. It reopened in late July, with strict rules, players only being allowed to book in fifteen minutes before their round, beginning at 7.00am, and with social distancing maintained. On the day of warm sunshine when we speak with Trevor, he reckoned there were around 200 on the Course, or waiting to play, sitting at the tables with their energy-boosting drinks outside the clubhouse, the restaurant remaining closed because of the Covid-19 lockdown.

Dedicated to the Course he looks after, and a golfer himself, Trevor is equally passionate about the wildlife flourishing in the extensive wild areas. He points out that his experience and knowledge of the creatures and plants of the Castle Course was acquired on the previous courses he worked on, which also made provision for wildlife.

“The courses were built for golf, but with the habitats that came along with them, came responsibilities. You had to work out that you could not eradicate the wildlife, while in fact the wildlife helped you. If you have mice and voles in the long grass, then the raptors catch them and keep them down. The bigger raptors and foxes also keep down the rabbits. The birds feed on the insects, so the golf course becomes high in biodiversity. We found that certain plants, like yellow rattle, keep the coarse grasses low so that wildflowers can flourish.”

Over the years plant seeds, perhaps fortuitously borne by birds or on the feet of deer and foxes, have arrived to enhance the delightful diversity of the Course. Who knows how the rare plant Tall Melilot by the path arrived? The wetland areas are perfect habitats for dragonflies. The two beehives were designed to help the declining population of pollinators. This summer the warm air was alive with Meadow Brown butterflies.

In the early morning walks we take on the Castle Course we see outstanding examples of Trevor’s care and commitment towards wildlife and the natural environment. Roe deer move across the fairways; golfers can pause to watch dolphins cavorting offshore.

“People were keen to come and monitor what the Links Trust has on its golf courses,” Trevor says. “We have had support from Fife Coast and Countryside Trust; Fife Council; St Andrews University; and from other organisations, and individuals. St Andrews students have been taken on tours of the Links so that they can see the biodiversity.” Trevor acknowledges with pride and gratitude the support he has received from the management of the Links Trust, including the manager of the Castle Course.

Trevor gives talks to publicise the environmental commitment of the Links Trust, and what has been achieved at the Course he helps to manage. Nothing is too small not to merit attention. “I went to an insect workshop to find out what insects we have on the Courses, because you wonder what all the little bugs are.”

Happy that his bird species list includes merlin and snipe, Trevor’s invertebrates include golden ringed dragonflies, Common Blue butterflies, Cinnabar Moths, and Red-tailed bees; his plants include Goat’s Rue, a new species for Fife. He has a wish list, “I would really like to see newts in the wetlands.” 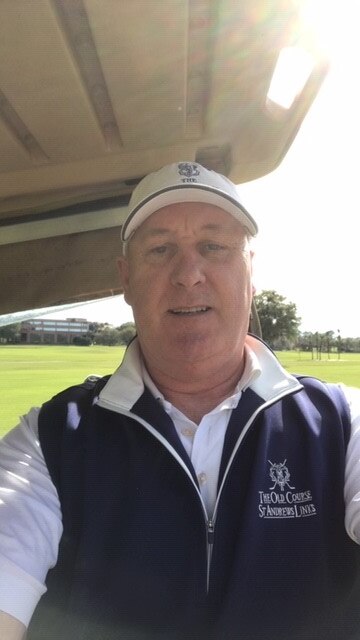