Sincere congratulations to Professor Eric Priest who has been awarded the prestigious Senior Prize of the European Solar Physics Division of the European Physical Society for long-standing leadership via mentoring, supervising, and field-defining textbooks, and for fundamental contributions in key topics of solar magnetohydrodynamics, particularly magnetic reconnection in the solar atmosphere, and solar coronal heating.

It was a huge surprise and pleasure to be given this award, which is a tribute to the stimulating environment in St Andrews, also to my superb long-term colleagues, especially Bernard Roberts, Alan Hood, Clare Parnell, Duncan Mackay, and Ineke De Moortel, with their academic offspring.

Arriving in St Andrews over 50 years ago as a young lecturer in 1968, I was captivated as the train from Leuchars junction wound its way along the Eden Estuary, entering what seemed a magical world. I soon also fell in love with Clare, who has been my constant support and companion, to be joined by four wonderful children, Andrew, Matthew, David, and Naomi, who continue to be a rich blessing.

After 3 years, I took a year’s sabbatical (1971-72) in Boulder, Colorado, which completely transformed my research life, since I returned with a vision of how to conduct research. My old research supervisor had stressed high-quality research, asking fundamental questions. In the USA, however, there was also a huge vitality; I learnt the importance of collaborations, sharing ideas, and being inspired by the latest observations.

So, I returned to St Andrews with great enthusiasm, beginning the task of slowly building a research group in which my role was to provide an environment where all are nurtured and can flourish. Key to this was questioning, in a manner designed not to criticise or show how clever you are, but to help build better understanding, while probing in a positive way the core assumptions and steps in the argument that are often hidden or implicit. Effective communication and helping one another were also crucial.

As the research group and my external responsibilities grew, I felt the need for a 6-week “scientific retreat” each summer, at a research institute abroad, where I could recharge my batteries and come up with new ideas. These have been in New Hampshire, Paris, Colorado, Montana, where there is in each case a special person with whom I can resonate in a mysterious way. Each is someone I admire, someone I like, with whom I can discuss deep ideas; we share a huge common understanding and knowledge, but complement each other, so that each brings something new and vital to the discussion.

Whereas science in the past was a fairly solitary pursuit, scientific advances are now usually the result of collaborations. I go on my retreat with no plans, but at the beginning meet up with my collaborator, when we brainstorm in a vibrant open dialogue – until suddenly and mysteriously, one of the many ideas that have been floating around in our minds crystallises, then we know which new direction we should take together, working hard using all our skills and experience built up over many years. This creative process is similar to the way writers, poets, painters, musicians work, which points to a commonality between the arts and the sciences.

Every summer I look forward to this trip away, bringing back a new idea that can be passed on to research students or postdocs to develop further. It is the way I have been able to keep a sense of creativity and vitality in my research. As this is the first summer for 40 years I have not had such a retreat, I am sorely missing it.

What’s the nature of my research? As an Applied Mathematician, I build mathematical models of physical processes in order to understand in a deep way the nature of what is going on in them. In particular, I have been fascinated all my career by the complex, subtle and beautiful ways in which magnetic fields in the Sun interact with the atmosphere to create dynamics events.

At the root of this interaction lies the fact that the Sun is not a normal gas, but an ionised gas or “plasma” (not to be confused with blood plasma). We are all familiar with the normal three states of matter that surround us; namely, solids, liquids, and gases. The fact is that we can go from one to the other, such as ice to water, to water vapour, by simply raising the temperature. But, when we heat any gas enough, it eventually ionises, turning into the fourth state of matter, a plasma, as electrons are stripped off the atoms and move around freely as electric currents. Going up in our atmosphere, eventually we reach the ionosphere, which is where the atmosphere has become plasma. Indeed, over 99% of the universe (including the whole of the Sun) consists of plasma, but on Earth we are sitting instead inside a very unusual bubble of mainly just solids, liquids, and gases. 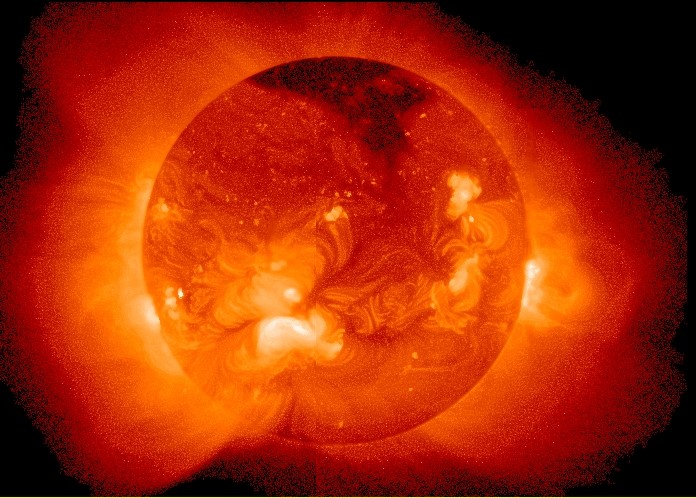 Now, the big difference between a normal gas and a plasma, is that in a normal gas, such as the air that surrounds you, there is no interaction between the gas and the magnetic field. However, in a plasma the situation is startlingly different, since the plasma and the magnetic field interact with each other in subtle and complex ways. This interaction is described by a beautiful set of equations of “magnetohydrodynamics”, which has captivated me for the past 50 years. But I shall resist the temptation to write them here for fear of scaring you! 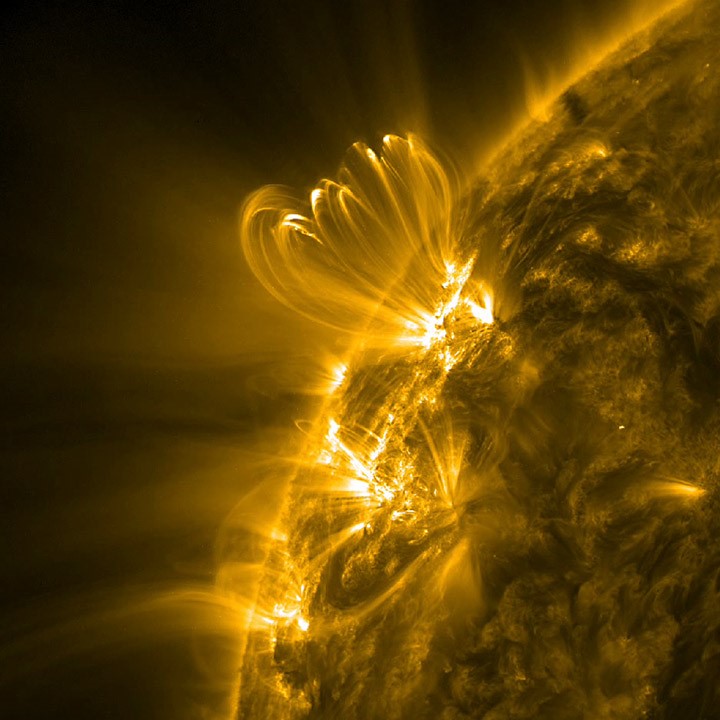 One of the problems I have worked on is to understand how the outer atmosphere, or solar corona, is heated to several million degrees by the magnetic field (Fig 2 above) by comparison with the temperature at the Sun’s surface of only 6000 degrees. We believe this heating takes place in myriads of tiny regions where the magnetic field collapses and electric currents grow to enormous values so that they can heat the plasma. A second problem concerns the occurrence of huge ejections of plasma and magnetic field (Fig 3 below) from the Sun, accompanied by solar flares, when enormous amounts of magnetic energy are suddenly converted into heat and jets of plasma as magnetic fields break and reconnect. When these ejections reach the Earth they influence the space weather around the Earth. 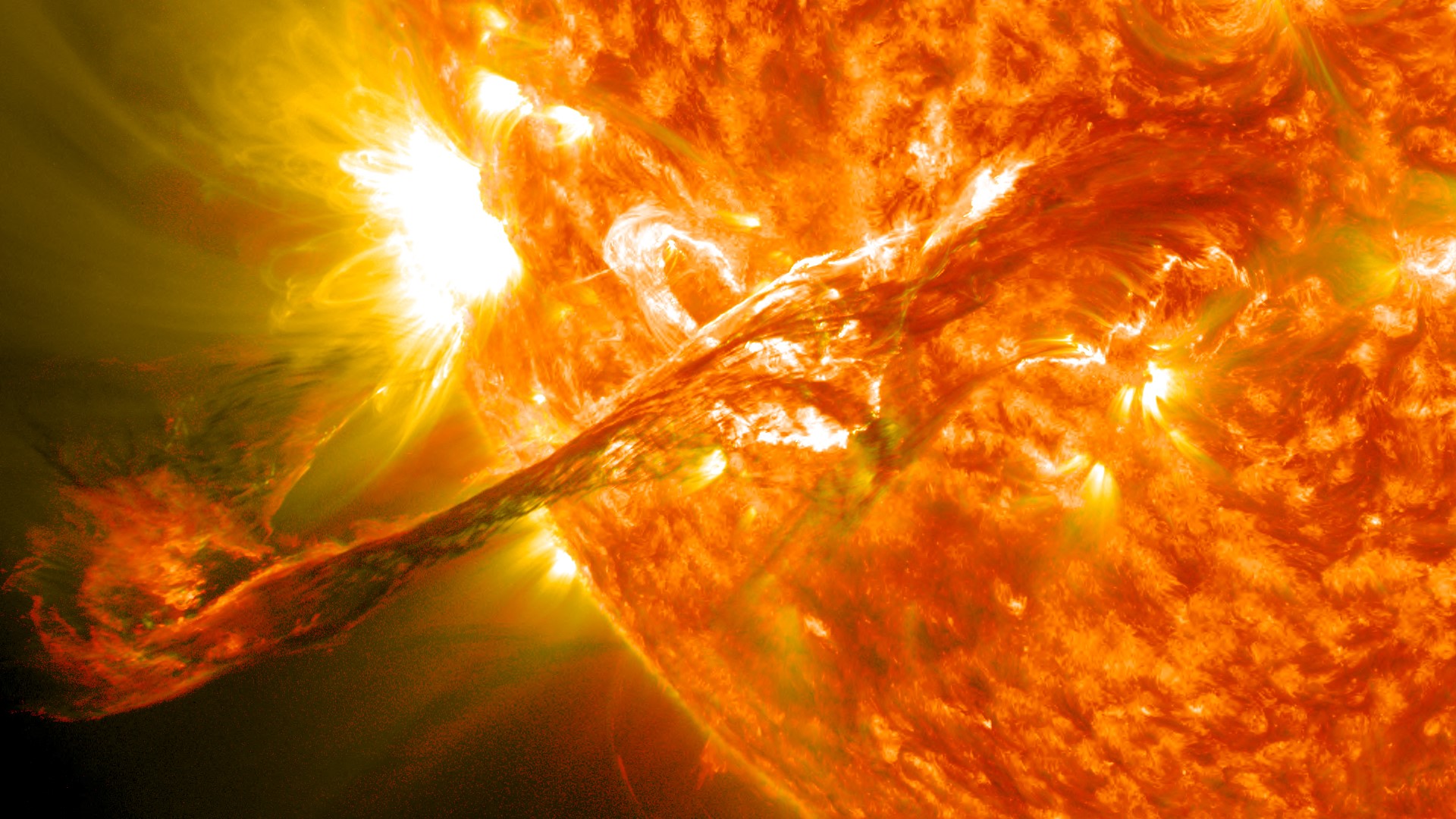 Fig 3. A Huge Ejection from the Sun (courtesy the Solar Dynamics Observatory)

In conclusion, I feel immensely fortunate to have spent my time in such a beautiful and supportive environment, surrounded by amazing friends, colleagues, and students, supported as ever by my wife and family. Thank you to all who have helped to make this voyage so enjoyable. 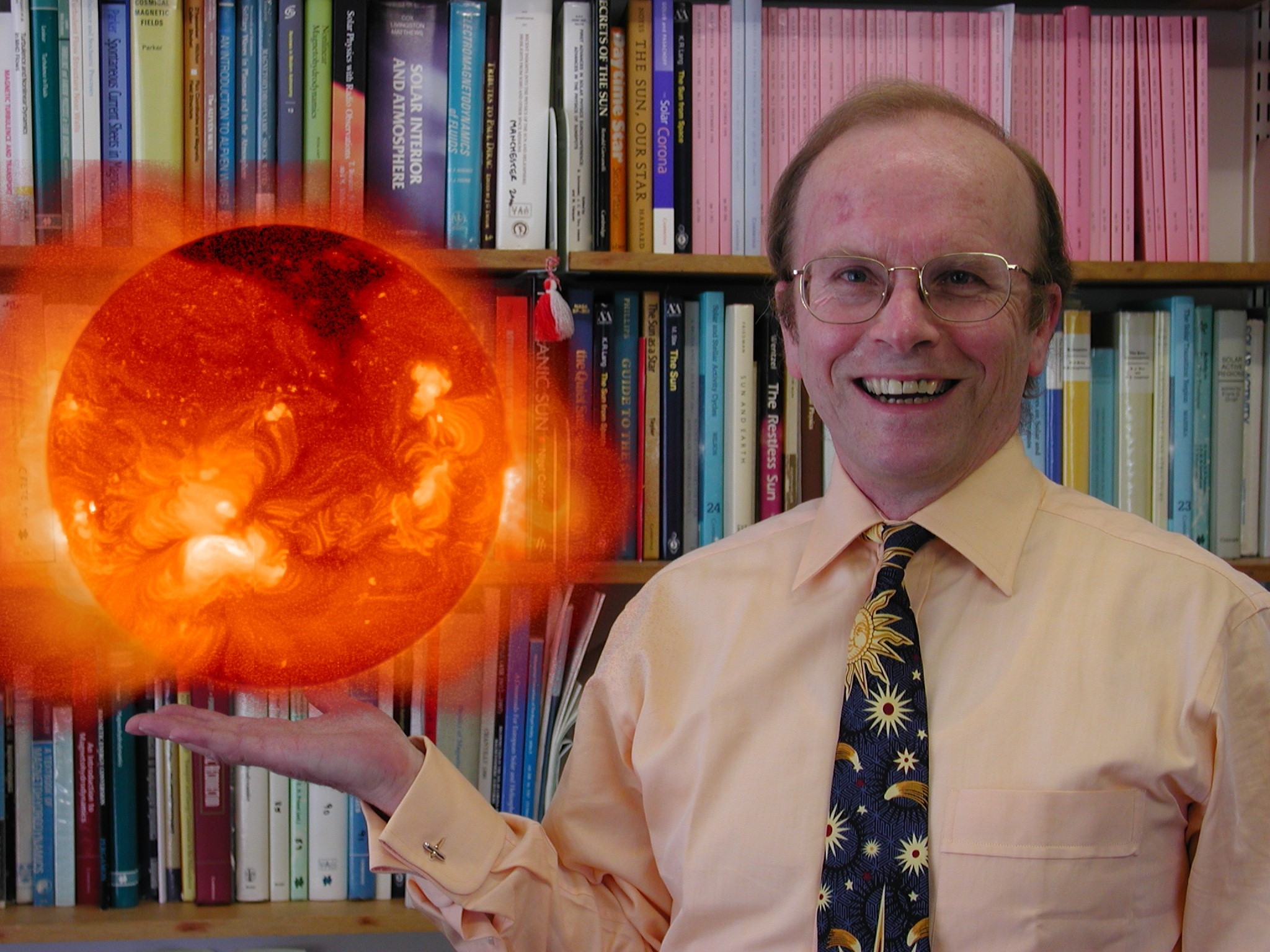